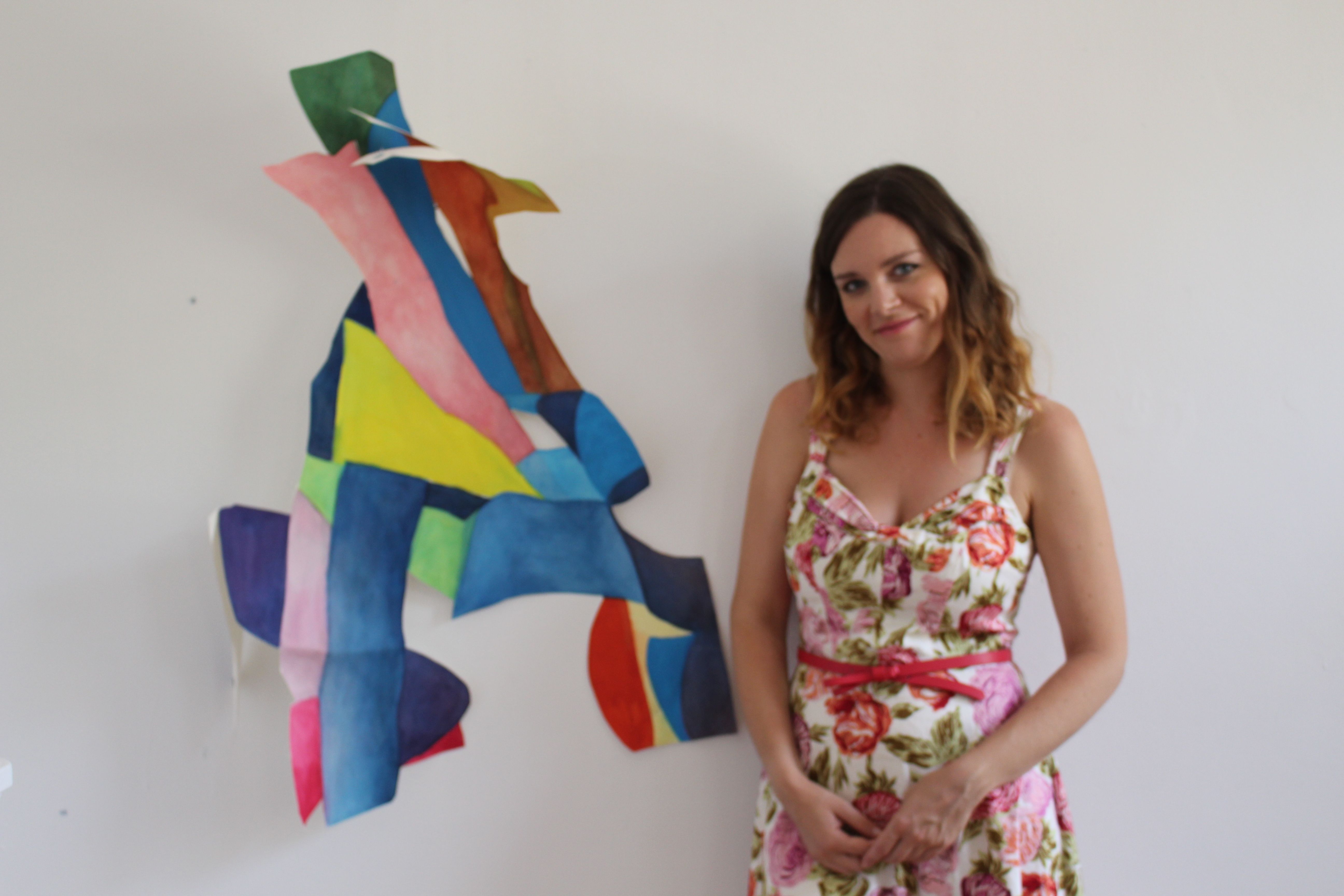 Julia Kennedy-Bell Culture at Work emerging Artist 2015. This visual art emerging residency project expands Julia Kennedy-Bell’s practice of painting in 2 and 3 dimensional forms to include new materials emphasising the associations that are made when two contradictory forms and processes merge. The new work has been created exhibited in three spaces at Culture at Work as part of the residency. Colour planes in the studio space, Colour constructs on the magnet wall and Vinculum  in the Acccelerator gallery. The aim of this emerging artist residency project is to experiment and research the field of painting, Julie is expanding materials and forms from recent projects.

Julia has discussed her work with architect Aaron Massingham to explore design strategies around materials that enhance the structures of her 3D paintings and is mentored by visual artist Liz Shreeve on technical and structual manipulation and curatorial installation of 3D paper works, and Sherryl Ryan at Culture at Work during the residency.

The emerging artist residency program is supported by State Street to assist artists toward professional development and employment in the arts sector.

SR: Julia can you tell me how your work has transformed or developed since you left the College of Fine Art in 2010?

JKB: Since I finished, I’ve been just trying to keep up my painting practice, and after a couple of years I sort of hit a wall and then I started making some paper installations which I painted and cut up as a way to help my painting, which it did, but then I started to explore what i could then do with these paper works and i found they were a good resource for me to generate compositions and for me to understand what I was trying to do with painting in the first place and since then I have been developing doing painting and doing paper installation in tandem and they at the moment it kind of feeds of each other my last work I started taking photographs more than drawing the installation and started referencing some of the photography in the paintings and a few ideas that have come up in the process of making these works one of whih was to make some aspects of the work more 3 Dimensional within the traditional painting and that was when i started becoming interested in using other materials with the work.

SR: Have you always been a non objective artist?

JKB: Yes in second year at COFA I took a course in abstraction and ever since then s it something I thought had a lot of potential I could develop and i was interested in colour and colour studies those things seem to stick together well and something ive continued ever since.

SR: ….and where do you see your work moving in the next 10 years?

JKB: I’d like to work on a larger scale with some of they’re paper installations now, but translating them into other materials that could potentially be public artwork or a large installation that was made out of more permanent materials.

SR: So give me an example of what kinds of spaces or places you could imagine your work would might fit into?

JKB: I guess in a commissioned work that was in a foyer or as part of a design for a bulding or I can also see some of the paper works being translated into things like fabric some or in the public gallery space, as a work in itself.

SR: Have you been working with any new materials lately?

JKB: Yes I have been working with copper sheeting which is very malleable and can be painted on and working with that on its own but incorporating with wood as well and see what I can create.

SR: Have you enjoyed using with new materials?

SR: So if you had the opportunity to create a new work in an architectural space can you talk us through what that might look like? Say if someone gave you a budget and they said they could fabricate the materials for you, what would you do with that?

JKB: I think I’d focus on one wall like a feature and either develop something that was more like an artwork or if it was under an interior’s brief then I guess creating some elements that were 3-dimensional that came out of the wall that were sort integrate into the overall design of the buliding yes but probably using metals or resins anything that could be fabricated in a way that could carry the sort of geometric features of the work.

SR: Who would be the major influences on your work in the visual arts – other visual artists?

JKB: In general probably the American abstract painters from the 50 early 60s like Frank Stella.